Most Convox users deploy apps that they develop in-house. A team of developers iterates rapidly on new features and fixes, and they deploy that code multiple times a week, if not multiple times a day. This means building images frequently. When using Convox in this fashion, it’s easy to lose sight of one of the delightful benefits of an image-based platform like Convox: the ease of deploying apps other teams are developing, using images that have already been built.

We’d like to share an example of deploying just such an app–one with extensive and familiar functionality. With a few lines of YAML config and a couple Convox CLI commands, you can deploy Bitbucket Server to a Convox Rack running in your AWS account and have it ready to demo in just a few minutes. Here’s what it takes:

To visit your Bitbucket Server app, run convox apps info bitbucket-server and visit the URL listed next to “Endpoints.” You should see a Bitbucket “starting up” screen like this: 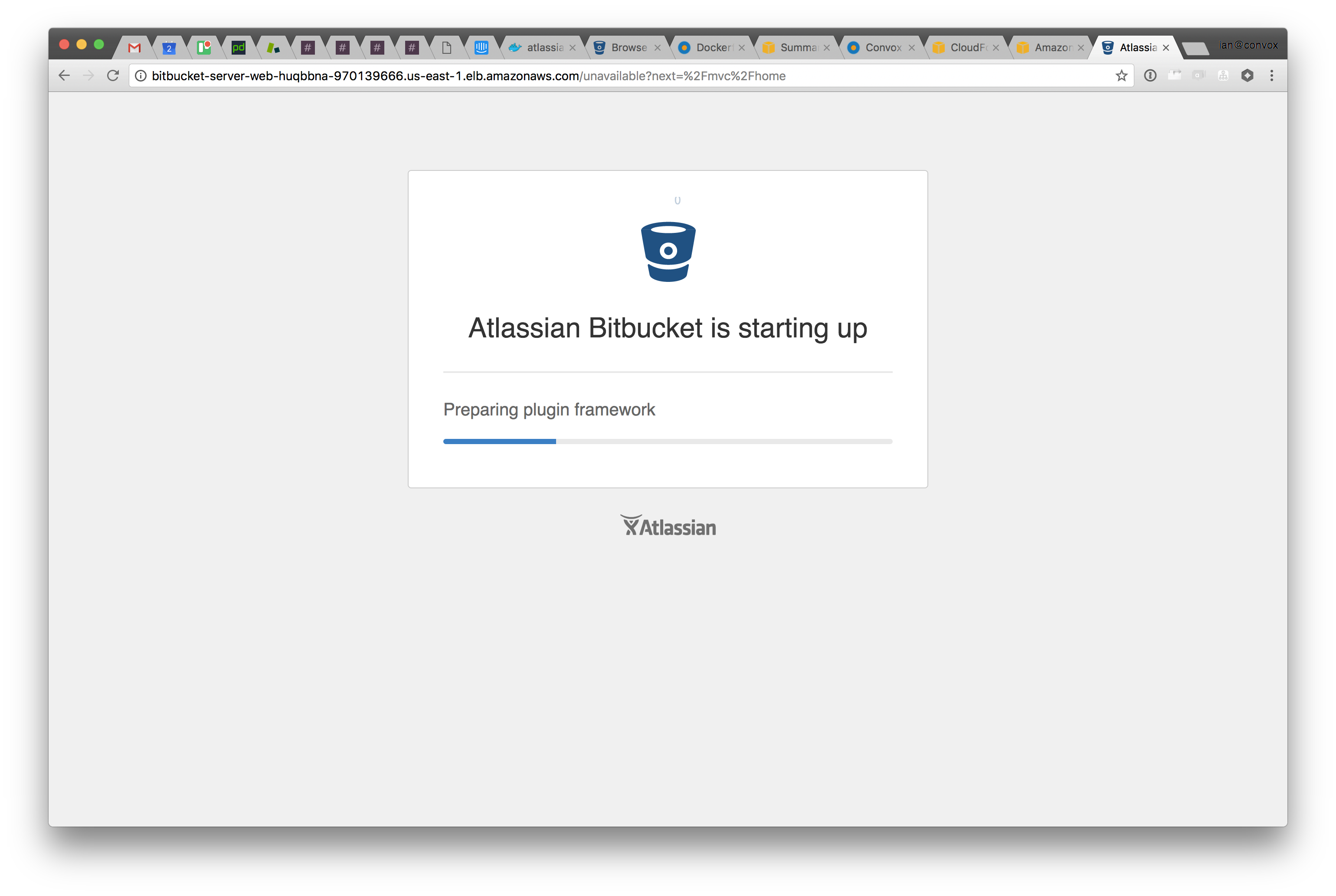 Why was that so easy?

Had you deployed the codebase of an app instead of an image, you’d have needed more configuration, and the deployment itself would have involved a build step to create an image before running it. In this case, Atlassian has done all of the hard work by providing a ready-to-go Docker image: atlassian/bitbucket-server. You simply declare the image in your docker-compose.yml, allocate an appropriate amount of memory for the app, and tell Convox to forward internet traffic on port 80 to port 7990 of the web service (see EXPOSE 7990 in the image’s Dockerfile).

What if I don’t have a Convox Rack?

If you haven’t used Convox before, then this demo might feel out of reach. The good news is that you can set up a Rack in about 20 minutes by signing up for a Convox account at console.convox.com and then following our welcome checklist. It steps you through integrating with an AWS account and installing a Rack.

If you’ve never run software on AWS before, this would be a great way to try it out. Convox takes care of creating dozens of resources and configuring them for a convenient experience.

If you’re still hoping for a five-minute demo, you’re in luck. You can get a glimpse of how powerful images can be–without an AWS account–by running Bitbucket Server locally with convox start. Just follow these steps:

To interact with your BitBucket Server app, visit http://localhost in your browser.

This exercise is a good reminder that builds can be decoupled from deployments. It also hints at how using images can lead to more streamlined workflows, and faster, less error-prone deployments. Convox layers this functionality on top of AWS to provide an ideal pairing of convenience and power.